Polishing the look, preserving the fun

Miri Plowman and her partner, Gabe, began serving tiny Dutch pancakes with big flavor (known as poffertjes) at farmers markets around Seattle in 2015. Just a few years later, the pair launched Miri’s at Golden Gardens, a beach café in Seattle’s famous waterfront park—just down the road from where they used to operate Miri’s Snack Shack. )

In addition to poffertjes, the seasonal menu at Golden Gardens features handmade flatbreads, grilled kebabs, and other items that emphasize local ingredients—along with summer treats such as popsicles and frozen drinks.

Opening this location was a significant step, and it was time to step up from the logo and branding Miri and Gabe created themselves when it all began. They also needed an identity that could be applied seamlessly across all of their services, including selling at farmers markets and catering for private events.

Miri already knew Josh through a networking group and had seen his work, while Josh and his family had already tasted Miri’s remarkable work. It was a wonderful match. 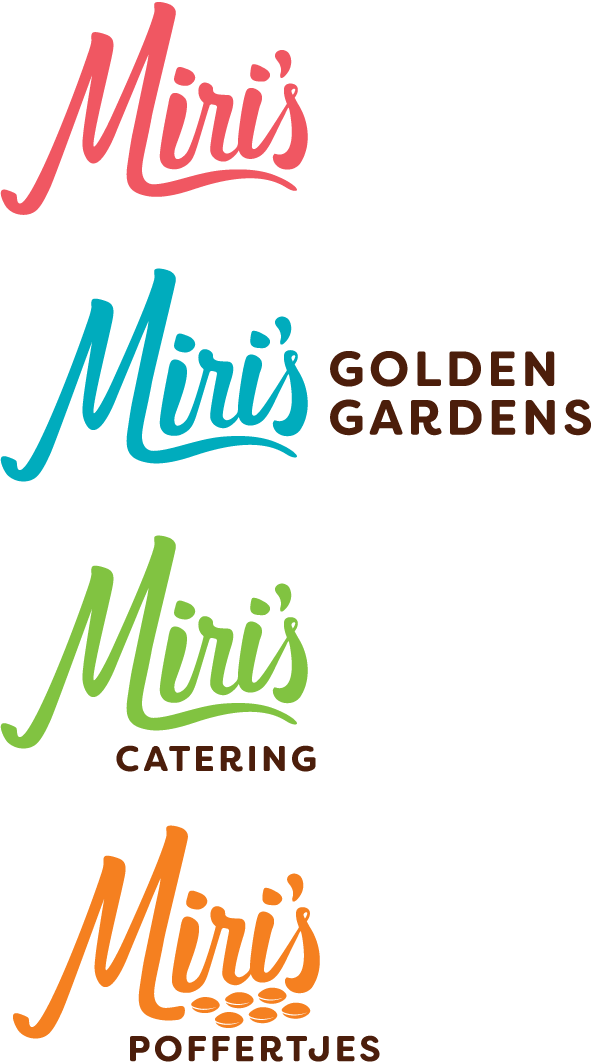 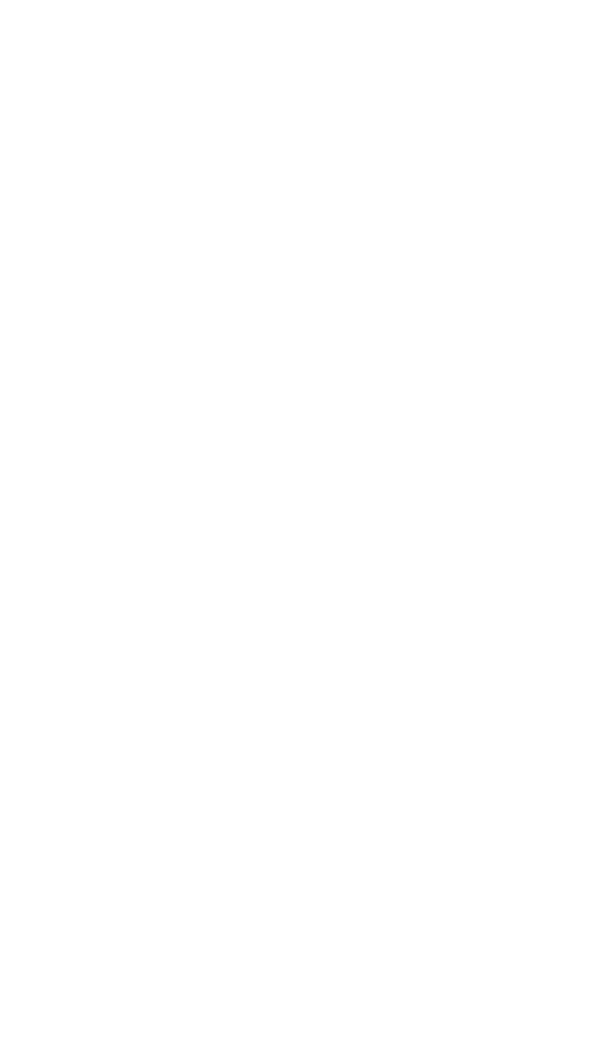 Keeping the budget in check

Opening a permanent location was a big milestone for this small local business—but the costs of getting up and running meant that there wasn’t much left in the budget for design. We needed to create a high-quality identity that reflected the colorful personalities of Miri and Gabe, without breaking the bank.

It helped that our plan was to improve on the original logo for Miri’s instead of completely walking away from it. Not only would this make the project more cost-effective for Miri and Gabe, it also meant that the new logo would have a sense of history and familiarity.

We did extensive research into local caterers, sellers at farmers markets, and cafés. Given the wide variety of operators in these spaces, it wasn’t surprising that branding was, well, all over the place. A lot of the newer (and smaller) businesses we saw lean heavily on DIY logos, which are easily identifiable next to the polished brands of larger, more established competitors.

The next iteration of the Miri’s brand needed to elevate the company’s identity, placing it in the same league as similar businesses that look more put-together and professional than the do-it-yourselfers; Miri and Gabe have more than 20 years of cooking experience between them, and a DIY logo doesn’t reflect the level of quality they provide. At the same time, it couldn’t feel corporate or cold: Both owners are full of energy and enthusiasm, and care deeply about the community. Their business follows suit.

Everything about the Miri’s identity needed to feel natural, and we really wanted to keep the handwritten feel of the original to maintain a human touch and a sense of playfulness. In the end, we couldn’t find an existing typeface to do that heavy lifting, so the type literally is done by hand—we created all of the lettering ourselves. It was a challenge, but a lot of fun, to get the letterforms and pen strokes just right. And this gave us a new level of respect for those who do calligraphy and display-worthy lettering by hand.

The final mark includes a chunky and exuberant calligraphic “Miri’s” paired with a system of sans-serif typefaces that make up corresponding services such as “Golden Gardens,” “Catering,” etc. We included a bright and contemporary color palette that feels at home alongside the delicious food on Miri’s menu. It is an appropriate evolution from the original signature-based logo. 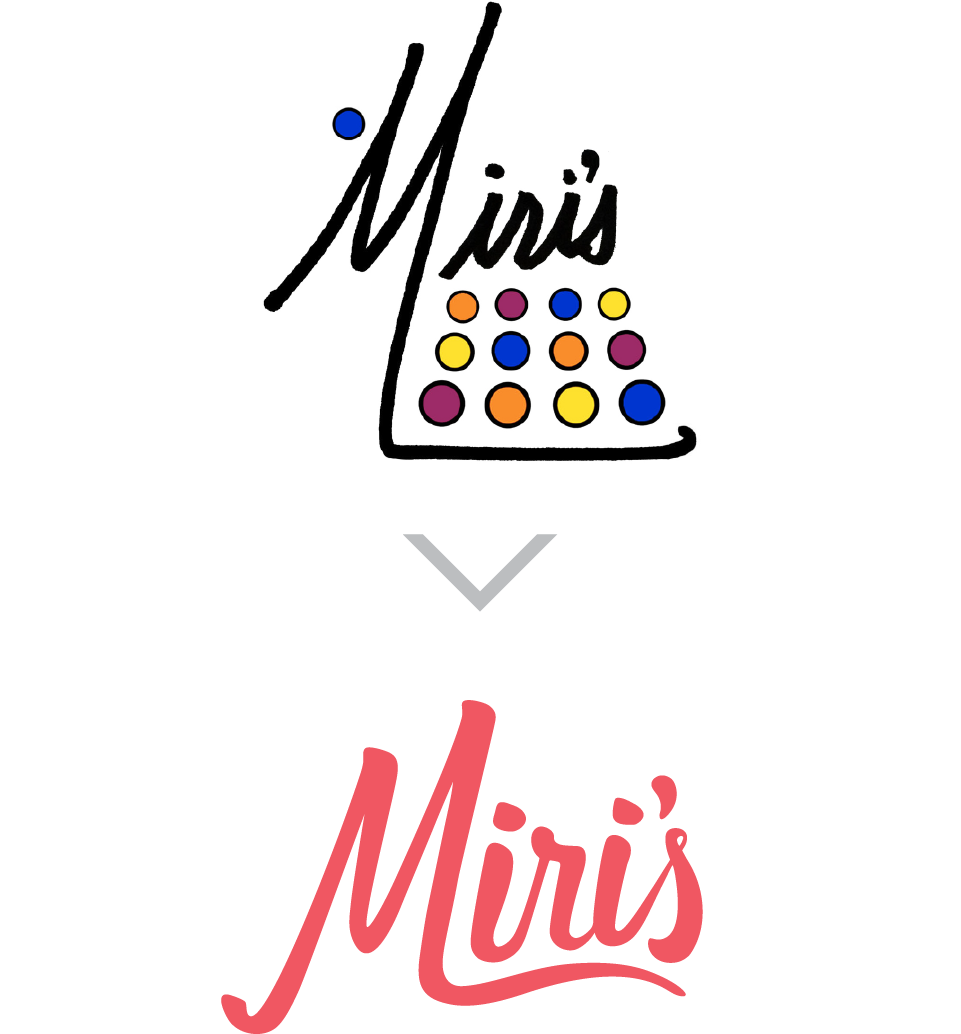 The refinement of the new Miri’s identity indicates that the quality of food and service is high, but the look also is loose enough to show that you’re in a setting that is fun and not stodgy.

We delivered a brand package that included versions of the Miri’s logo in each of the bright and happy colors we had selected for the color palette, along with variations for each service. We also broke these out into individual components—Miri and Gabe probably aren’t done growing, and we wanted to provide them with the ability to easily add to the family as their business changes.