It’s easy to think of graphic design solely in terms of how something looks, but both good and bad design can have an impact that extends far beyond simple aesthetics.

Just ask Al Gore—bad design might well have cost him the 2000 presidential election.

Most design choices don’t change the course of history on that level, obviously. But graphic design can guide you to behave in certain ways, often without you even realizing it. If you’ve ever gotten a parking ticket because you misunderstood a street sign, or chosen one bottle of wine over another even though you don’t exactly know why, design is quite possibly the reason.

Let’s take a look at one example of graphic design that had a clear impact on behavior in a negative way—and one instance where good design has been used to improve understanding.

In 2000, the presidential race came down to a disputed 537-vote margin in Florida, eventually giving the presidency to George W. Bush. Whether that result itself is a good or a bad thing is a matter of personal opinion, but one thing is clear: The ballot in Palm Beach County confused many people who said they intended to vote for Al Gore, but instead ended up voting for Pat Buchanan.

This rendering of the “butterfly” ballot design shows why. If you look at the left side, you might assume that because Gore is listed second, you would punch the second circle. But the second circle actually is a vote for Buchanan, who is listed on the right side of the ballot. According to the New York Times, Buchanan finished with about 3,700 votes in the county, almost 2,700 more than he received in any other. It might be too simple to say that’s why Florida—and the White House—went to Bush, but in a race that close, it’s not a stretch to think it played a role.

The good: parking signs you can understand

Parking (and perhaps more important, “No Parking”) signs can be very confusing, as graphic designer Nikki Sylianteng found when she was living in Los Angeles. And after getting a bunch of parking tickets, she decided to do something about it.

The problem wasn’t necessarily with each individual sign—but when multiple signs were posted with specific restrictions on certain days and times, it became incredibly difficult to understand when it was OK to park. Her solution? A day-planner-style sign that makes it much, much easier to avoid frustration (and tickets). 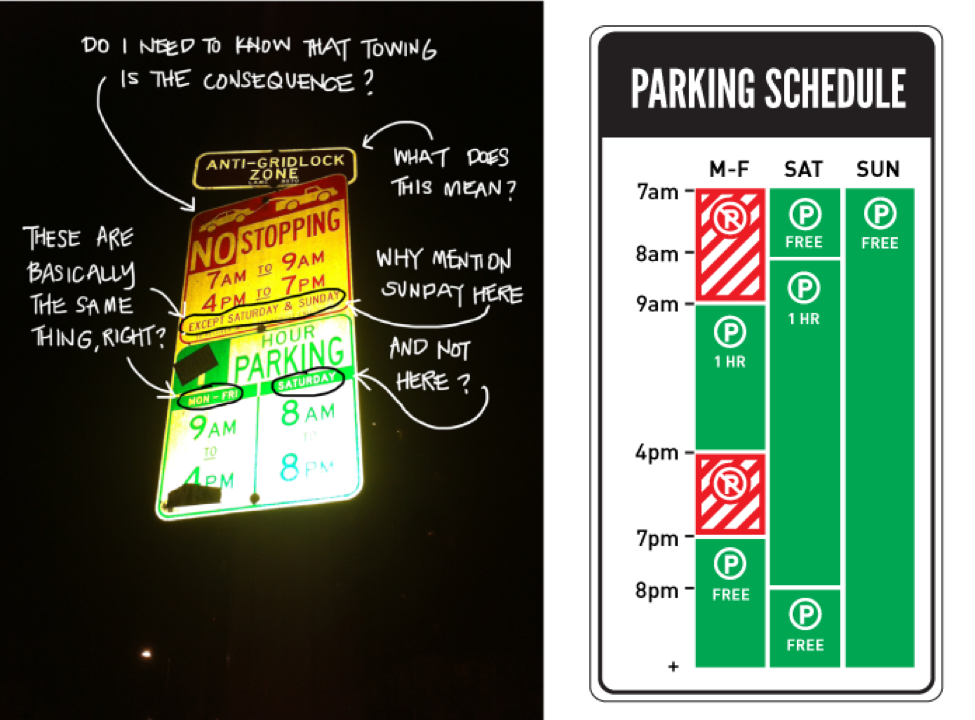 The only possible negative impact here might be for municipalities who rely on ticket revenue—but even they don’t seem to mind. Over the last few years, cities in the U.S., Canada and Australia have begun to adopt similar styles for their parking signs, or performed pilot studies on improving signage. The “To Park Or Not To Park?” project has been a clear win for all sides.

These are just two prominent examples of how design can affect our lives. There are countless others, including those wine labels we mentioned earlier—for instance, one producer’s redesign in the U.K. is credited with increasing sales of certain bottles by as much as 440%. We’ll tackle some of those in a future post.

In the meantime, if you’re wondering about the impact good design can have for your business, we’d love to hear from you. You can call Chalkbox Creative at (206) 932-8080, send us a message here or connect with us on Facebook.