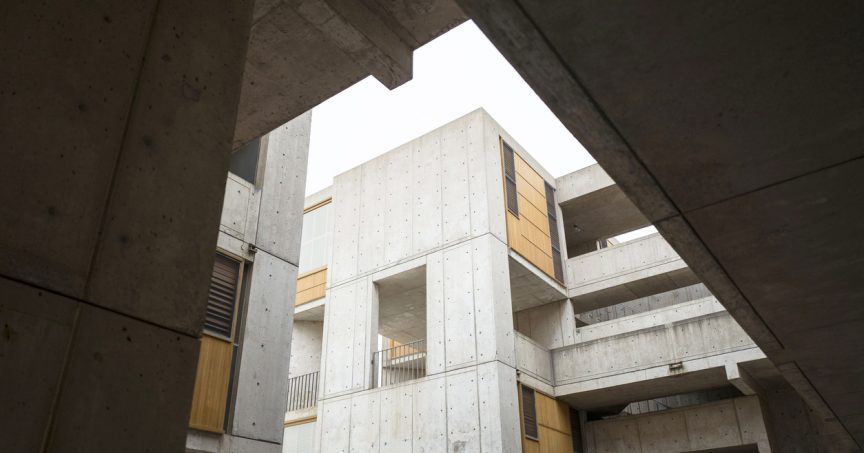 Sometimes the best inspiration comes from exploration. If you love design and architecture then a trip to Southern California is a great way to get those creative juices flowing. Some of the world’s most famous modernist architectural masterpieces are located here and are within an easy driving distance of each other. It’s honestly an architectural gold mine and a road trip is a perfect way to experience them all.

Below is a list of 10 notable modernist buildings that you could easily incorporate into a 3-4 day road-trip (see the route), but by no means is this list exhaustive. There are countless add-ons along the way to flavor the trip however you’d like. Take a look and start to plot your own adventure or have us do it for you! Just Your Suitcase Travel Planning.

*Please note some of these locations are currently closed because of covid-19 restrictions, but that can’t stop you from beginning to plan your awesome architectural automobile adventure! 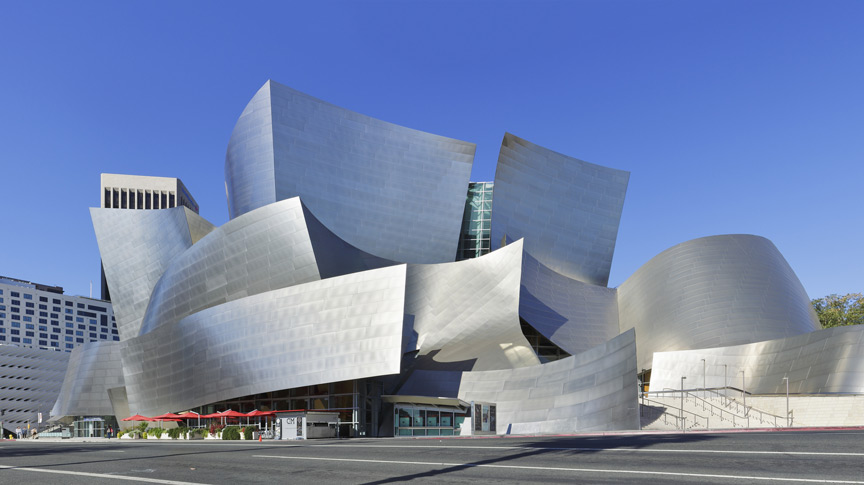 What would an architectural list be without something by Frank Gehry? This postmodern concert hall opened in 2003, one of the more recent buildings on this list, and is home to the Los Angeles Philharmonic. Its curving stainless steel panels and hardwood exterior evoke both modernist simplicity and a departure from square and rectangular norms. 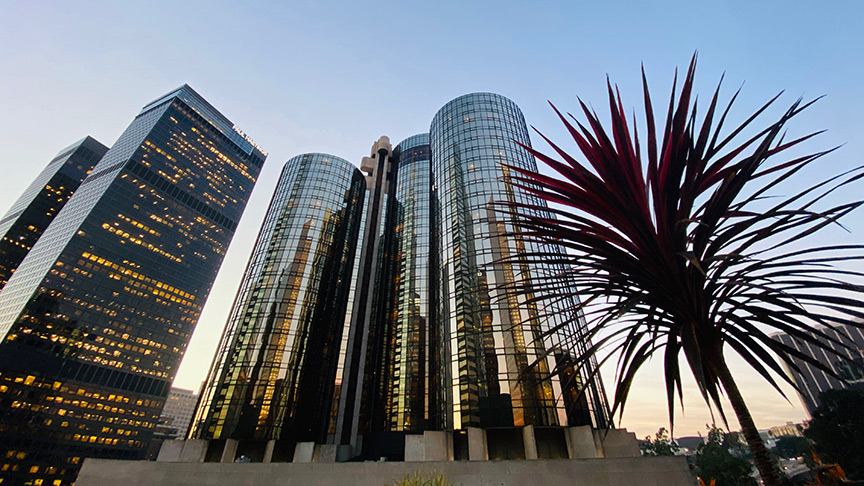 Some may be surprised that this massive behemoth of a hotel (the largest in Los Angeles actually) is even on this list, but both the hotel and its architect, John Portman, have been the subject of much architectural attention. The building has five cylindrical towers, occupies an entire city block, and is anchored by a giant atrium. The hotel has made many an appearance in film over the years and is a great example of postmodern architecture. 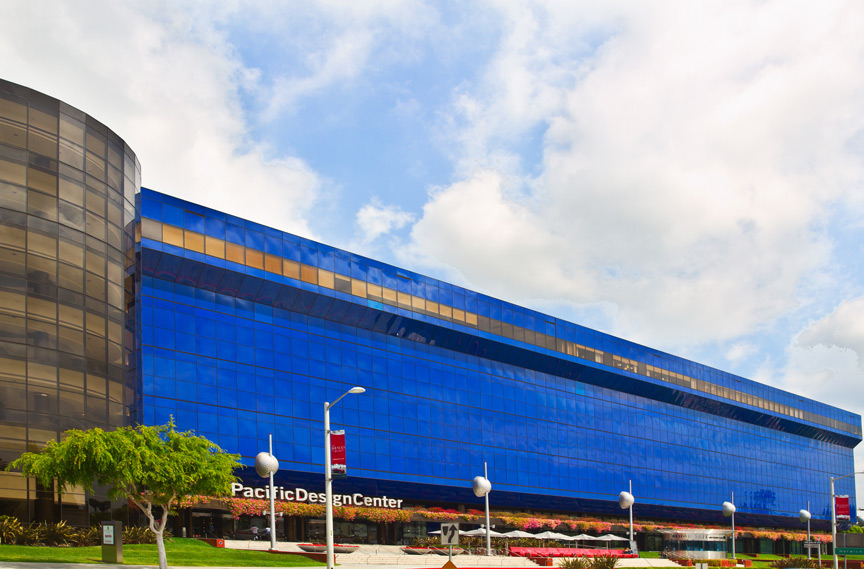 The PDC is a 1,600,000 sq ft (yes, you read that, right 1.6 million) huge and colorful multi-use facility dedicated to the Los Angeles design community. The architect, Cesar Pelli, who also designed the Petronas Towers in Kuala Lumpur, conceived the buildings as oversized fragments fallen to the earth, and that concept is obvious when you compare the buildings to the surrounding landscape. The most famous building is the Blue Whale, named for its obvious hue and gigantic size. 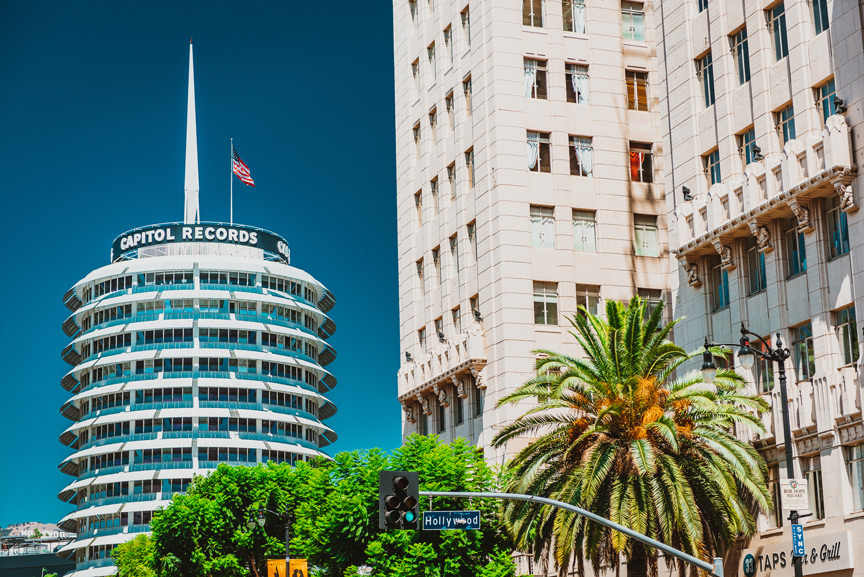 One of Los Angeles’ most recognizable landmarks the Capitol Records building is quintessential post-modern. Designed to resemble a stack of records on a needle, the architect, Louis Naidorf, was just 24 when he designed the building. It’s also been described as the world’s first circular office building. And since you’re in the neighborhood you might as well walk around and explore a bit of Hollywood. 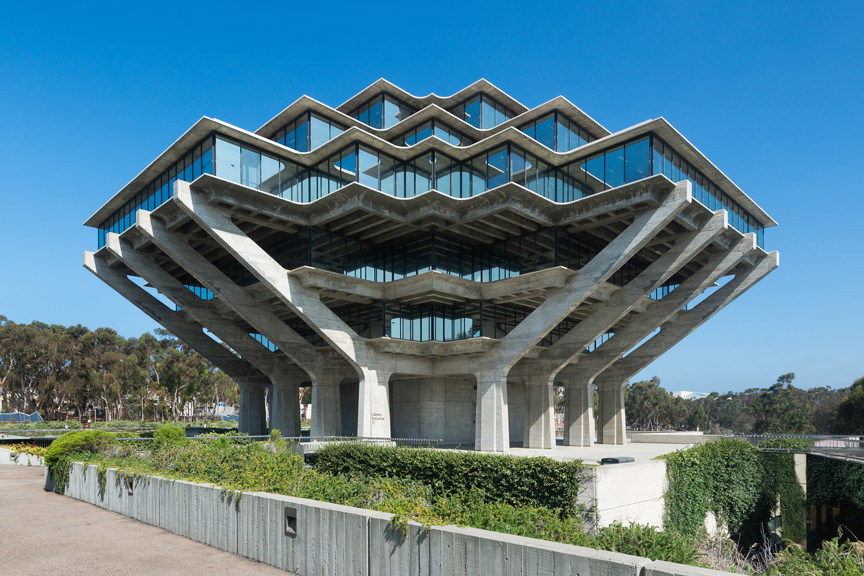 Named for Theodor Seuss Geisel, more commonly known as Dr. Seuss, this architectural gem is located on the University of California, San Deigo campus. It’s described as straddling both brutalist and futurist designs and the architect, William Pereira, intended the library to look like two hands holding a stack of books. Sitting at the head of a canyon the library has many beautiful vantage points for you to explore. 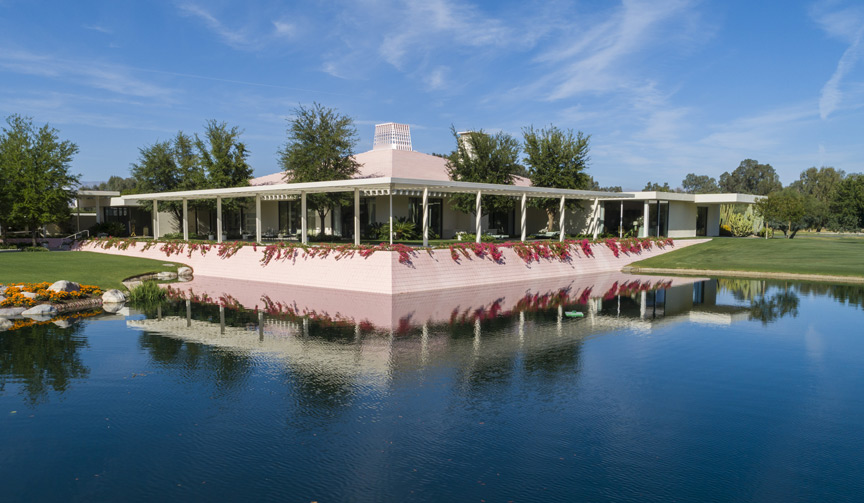 Often described as the “Camp David of the West” this 200-acre estate has hosted many celebrities, public figures, and foreign dignitaries. President Barack Obama has hosted both Chinese President Xi Jinping here in 2013 and King Abdullah II of Jordan in 2014. The property was owned as a winter retreat by the couple Walter and Lenore Annenberg and was designed by multiple architects, including William Haines and A. Quincy Jones. The main post-modernist house is 25,000 sq ft and was for a time the largest home in the county. 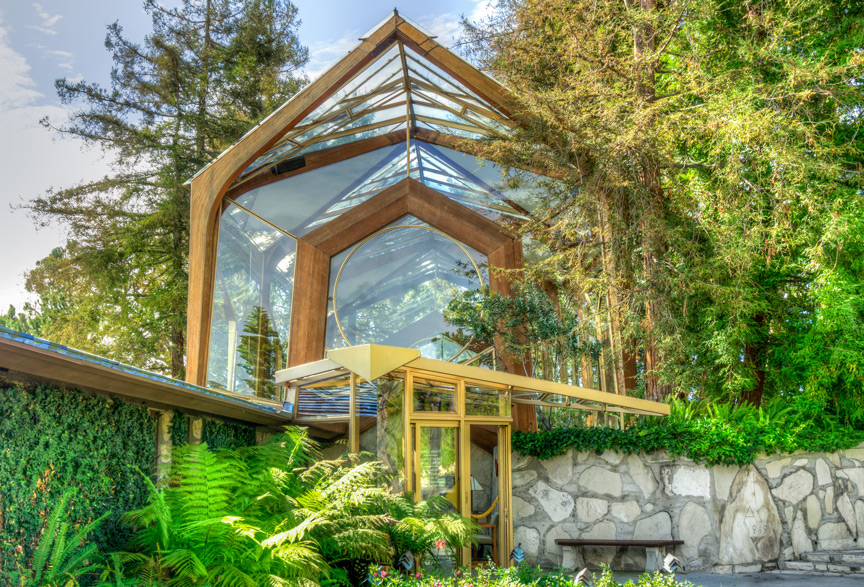 This famous church, also known as “The Glass Church”, was designed by Lloyd Wright, Frank Lloyd Wright’s son. As with Lloyd’s other works, it incorporates multiple geometric shapes and aims to bring the outdoor landscape indoors. 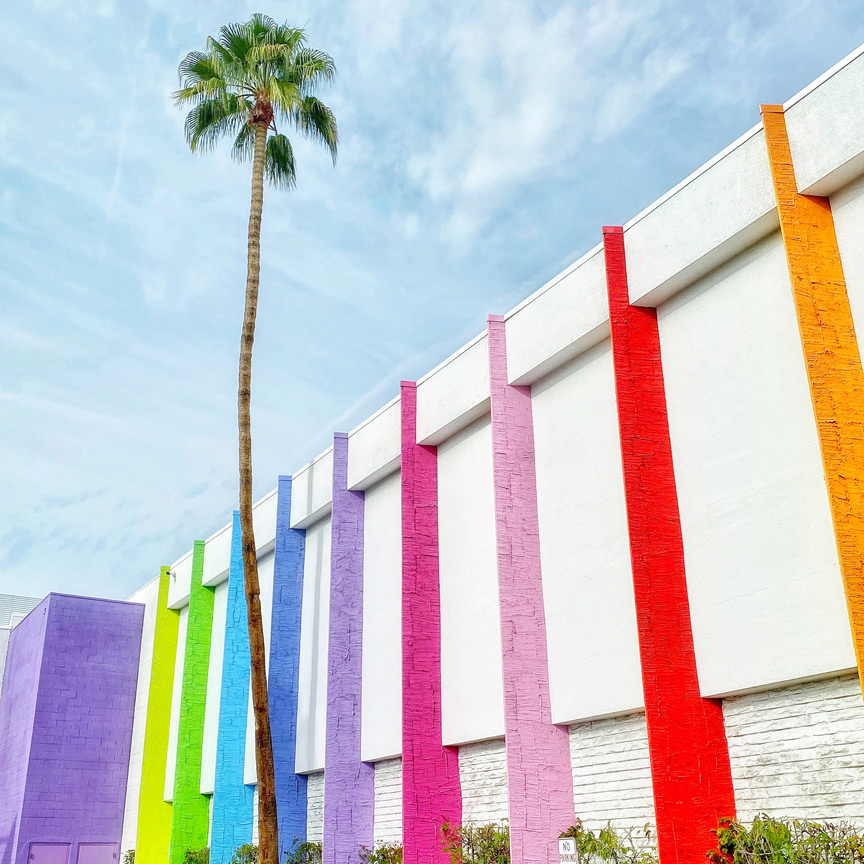 This entire city is well-known for its mid-century modern architecture and is a mecca for modernist design. With mid-century modern hotels and homes everywhere it’s easy to get lost and explore. But should you find yourself wanting a more defined path the city actually has its own Modernism Tour App! 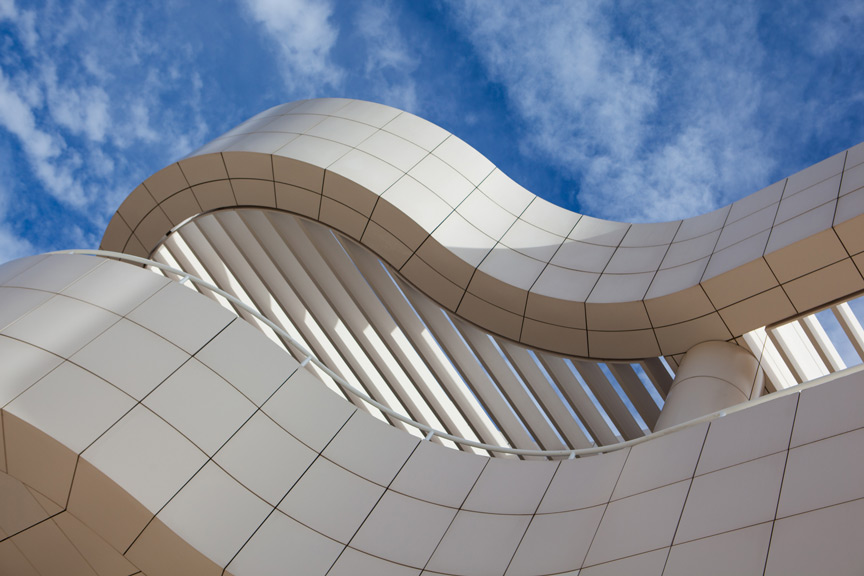 Set on top of a hill in the Santa Monica Mountains the Getty Center is a massive museum that combines modern design, beautiful gardens, open spaces, and spectacular views of Los Angeles. The architect, Richard Meier, envisioned using white Italian travertine to reflect the bright California sun into all areas of the museum. One of the museum’s most noticeable features is the incorporation of natural light into the interior of the buildings. The Getty offers a 45-minute architecture tour and be sure to also check out the art while you’re there. 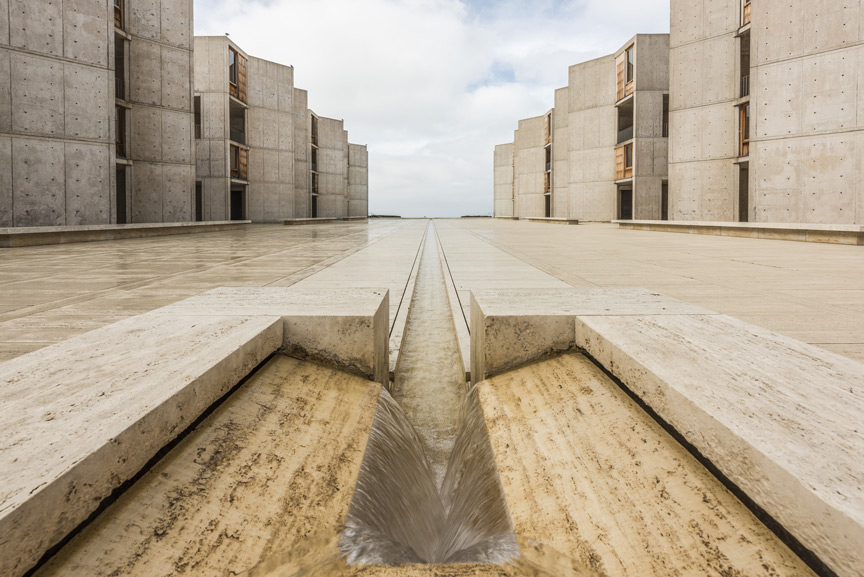 Located ocean-side in La Jolla the Salk Institute is a modernist masterpiece enchanting design fans since 1965. The architect, Louis Kahn, designed two parallel laboratories with a thin courtyard and a linear fountain that seemingly drifts into the Pacific Ocean. It is the architect’s most defining work and you’ll find it on any architecture list of the South West. In 1992 the American Institute of Architects gave the building the Twenty-Five Year Award which is given to only one building a year. 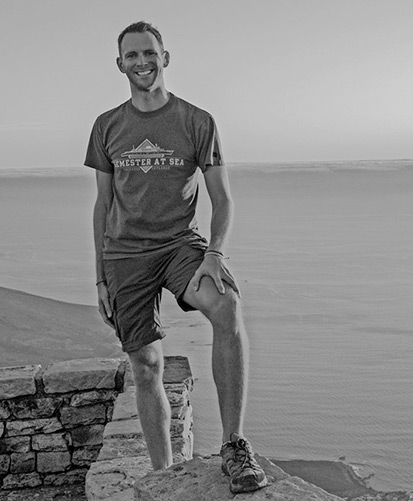 Scott Swiontek is a Travel Consultant and Founder of Just Your Suitcase, a Travel Planning company. In just a few easy steps Just Your Suitcase crafts personalized itineraries bringing you the perfect vacation experience without the stress of planning it.
We’d love to hear what inspires you! You can call Chalkbox Creative at (206) 932-8080, send us a message here or connect with us on Facebook.