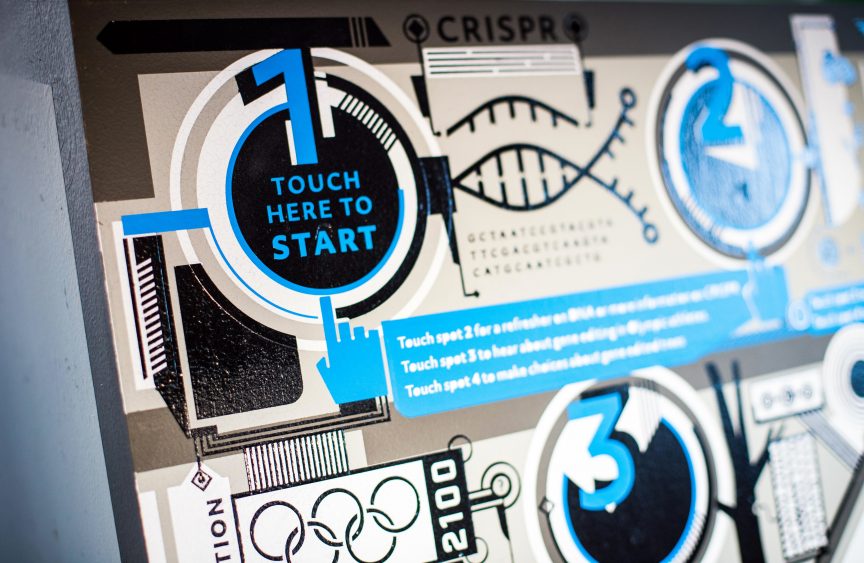 by Adam Taylor, Senior Designer at Chalkbox
At Chalkbox, I wear a lot of hats. I partner with our clients to develop brands. I design compelling and intuitive interactive experiences for desktop and mobile screens. I illustrate infographics and other concepts, layout magazines and books, create animated videos, and the list goes on. When I step away from my desk at the end of the workday, I put on yet another hat and maintain a studio art practice.

Here is what I’ve been up to lately: 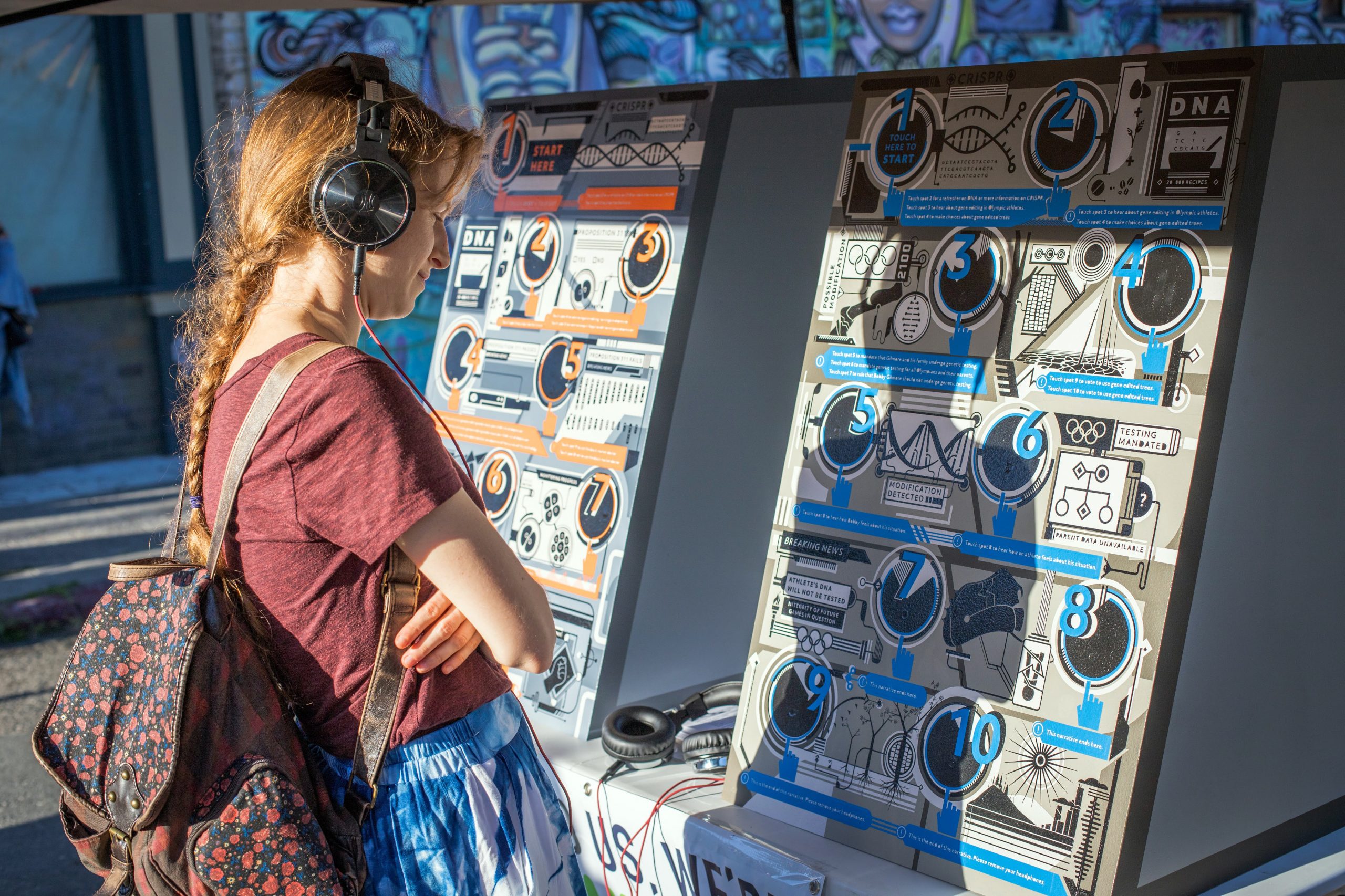 Through 2019 and into the first part of 2020 I had the pleasure of working with the CLEAR Project at UC Berkeley. CLEAR stands for ‘Communication, Literacy, & Education for Agricultural Research’. What they do in general terms is science outreach, developing strategies to communicate science to a broad public audience.

I worked closely with Rebecca Mackleprang, PhD, to develop an interactive exhibit about CRISPR gene editing technology. Collaborating with the rest of the CLEAR team, we developed a series of future-speculative narratives—basically ‘what-if’ scenarios that are set in the near future—that would then be presented in the form of a ‘choose your own adventure’ story. These were facilitated via constructed kiosks painted with conductive paint and connected to an Arduino chipboard. The chipboards played different audio recordings for each area of the boxes that a viewer touched. Viewers were guided through the experience by a designed, static interface, which indicated touch points and featured supporting illustrative elements.

Throughout the narrative, each touch point presented the viewer with a choice, which then lead them to different touchpoints. At the end of the experience CLEAR representatives were present to discuss the different choices made by the viewer, their reasons for those choices, and the importance of their role in conversations about how technology like CRISPR is used. The point being that something as powerful as gene editing shouldn’t be left to just politicians or the scientific community to decide how and when it is used; the rest of us also to be involved in these conversations.

The kiosks were initially presented at several events, including Oakland First Friday and the Fog Fest, both public farmers’ market-style events. Following these appearances, the kiosks were hosted as a temporary exhibit at the Lawrence Science Hall.

As we approached the end of 2019 and moved into 2020, we were working closely with Biotechnology Lead at the Lawrence Science Hall to secure funding for a more permanent exhibit to satisfy the level of interest in the project. We planned to compile data gathered during the first two events, improve the interface, and present it digitally. This would allow the project tomore easily collect data on user choices, and present that data back to viewers. Unfortunately, our efforts to secure funding ceased with the onset of the COVID-19 pandemic in the United States. I have hope that we can pick this up again in the future.

Running parallel to my efforts with the CLEAR team, I was working closely with Joe Wilkinson, a ceramic sculptor and close friend from graduate school. We collaborated on a 2017 exhibition after arriving in Seattle, and continue to look for opportunities to create public artwork together. In early 2020 we submitted a proposal for a public artwork installation at a community center in Seattle’s Capitol Hill neighborhood. The first stay-at-home order froze our city at the same time. We never received a response (for understandable reasons) and I suspect new opportunities to make physical artwork in public spaces may not be a thing for a while.

As a way to manage my own anxiety and stress about the pandemic, politics, and the dumpster fire that 2020 was quickly becoming early in the summer, I began to work on some self-directed digital projects. These loosely explored emerging research around the use of psychedelics to treat PTSD, anxiety, depression, and improve the emotional well-being of individuals with terminal illnesses. Much of this research began in the 60s, but was halted as the newly minted ‘War on Drugs’ dried up due funding sources. As that ‘War on Drugs’ has proven itself to be ineffective and disproportionally harmful to minority communities, research surrounding psychedelics, psychology, and psychiatry has gained new momentum. 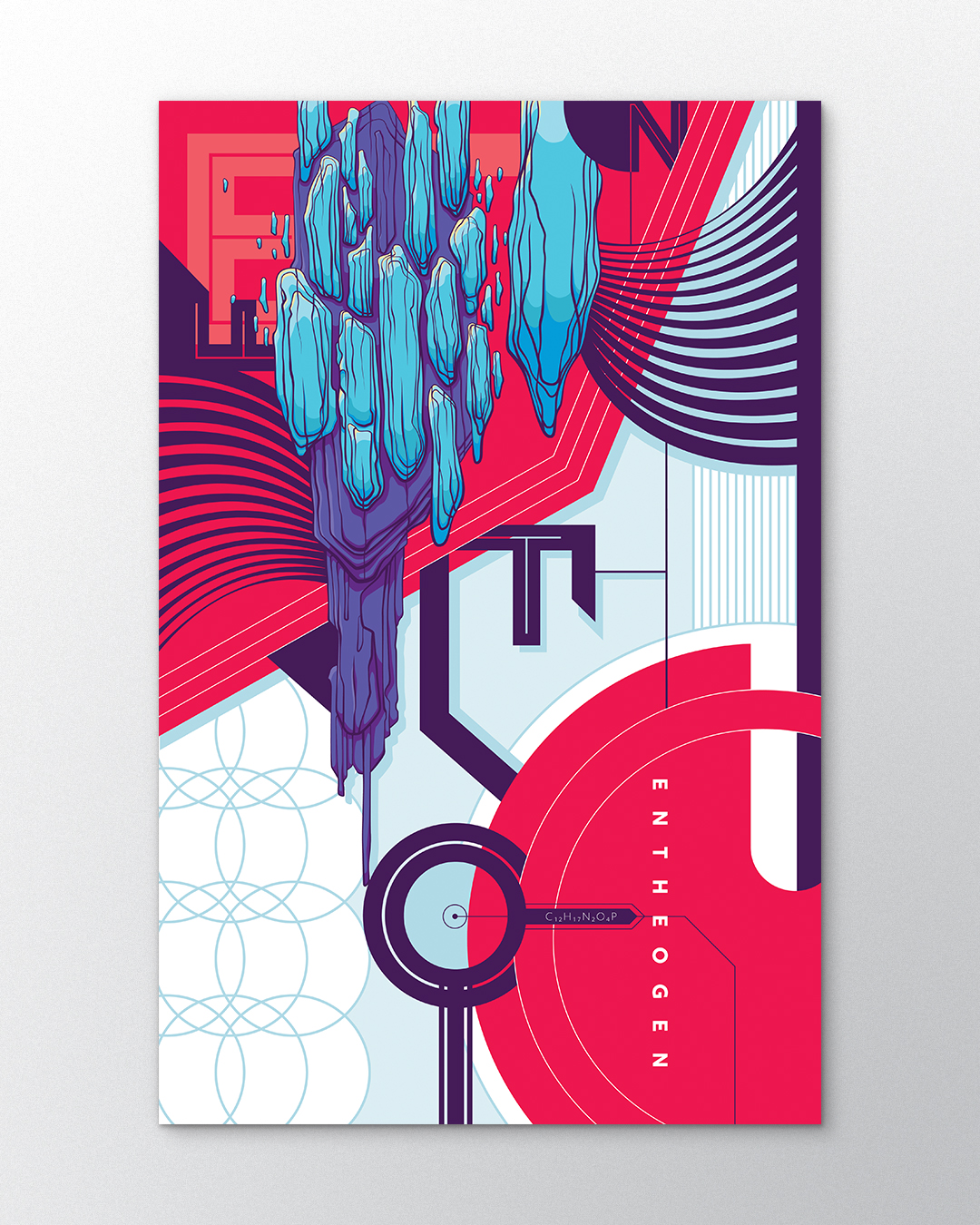 The focus of my self-directed project was to explore a vivid and complex visual language that does the opposite of the most fearful drug war era propaganda. Instead, my work would create curiosity, would feel vivid and abstracted, and would point to a common recorded experience of those undergoing treatment, the overview effect. The overview effect is something first described by astronauts looking at the earth and feeling a sense of unity and connectedness upon realizing that we all are on this rock spinning through space. But it can also be experienced through meditation, or carefully monitored psychedelic sessions with trained psychologists and psychiatrists.

That sense of connectedness is what I chose to focus on by looking at the similarities between electron microscopy images of human biology and natural imagery like rock formations. The idea being that we are not only connected to each other, but to the world around us; even down to our base components. 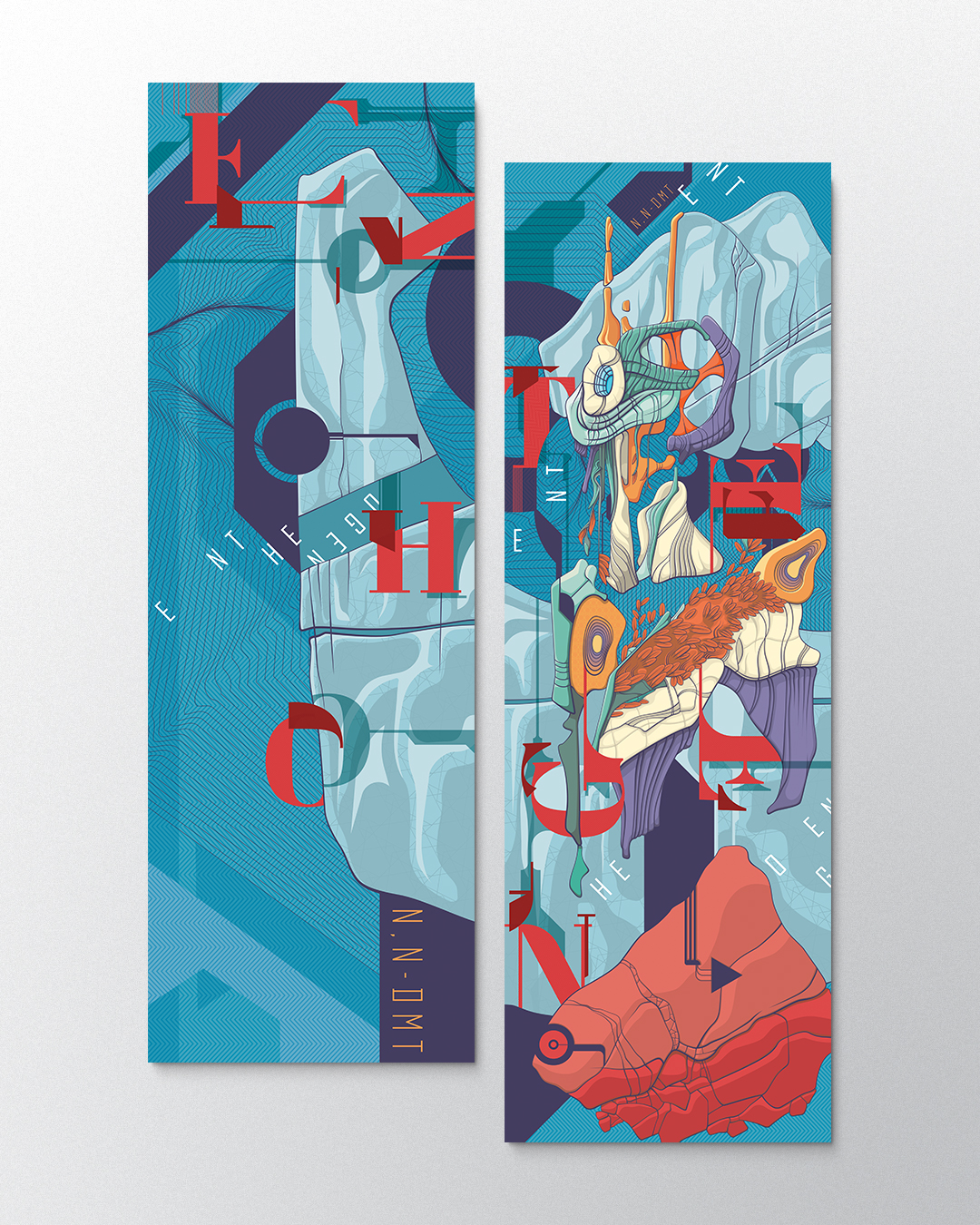 This project is very much ‘research and development’, much more about the journey, distraction from the realities of 2020, and making digital work that doesn’t come with practical worries like gallery installation. It is an idea that still really interests me. I see this as an initial design step and exploration that I hope to continue.

One of the artwork highlights of my 2020 was a ridiculously fun commission from two close friends in Salt Lake City. Tyler and Molly moved into a house in 2019 that, at the time, sported duck and waterfowl décor—everywhere—from the wallpaper to the color of the walls. While most of the ducks are now gone, Tyler and Molly wanted something that paid homage to that aspect of the house. They reached out in August and requested that I create a triptych for one of their rooms. Three paintings would showcase three waterfowl in very distinct visual themes; Sir Waddlesworth, a Steampunk duck; McDucktron 3000, a cyberpunk duck; and Gary, a classic punk rock style goose. Duck, duck, goose! 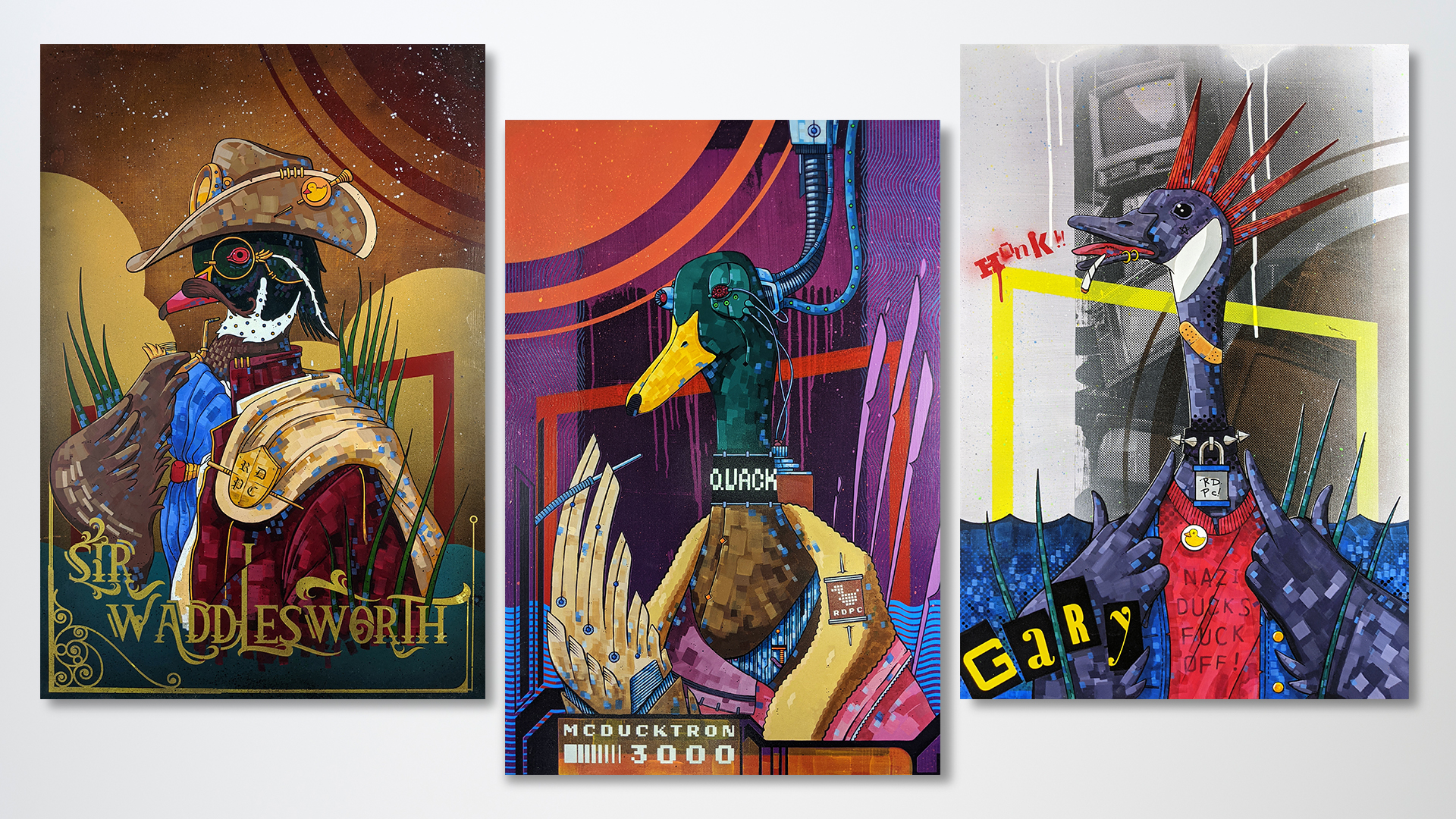 This project is nearly complete, and has allowed me to explore a number of new techniques including ink-jet image transfers and airbrush stenciling methods. It has also reconnected me with the wonderful world of acrylic painting. It’s a media I worked in often prior to graduate school in 2013, but I haven’t engaged with much in the years since. Fun content aside, this commission has turned into the best type of project, one where I am continually learning new things and am pushing myself to work in a way I haven’t before.

Have a look at more of what I do in my off hours. And if Chalkbox can help you put something new into the world, please get in touch.